You know the old saying, “If life gives you lemons, make lemonade.” Well I did just that after my last trip to the New Hampshire seacoast to photograph the sunrise.

My shooting partner that day was none other than Kris, The Wicked Dark chick herself. Based on the weather forecast, both of us had hoped for a sky full of dramatic clouds to give us a gorgeous, colorful sunrise just begging to be photographed. I should have known the morning wasn’t going to work out as planned when I couldn’t find the location I had spotted on my drive along the coast the previous day. Those of you with kids know how much of a challenge location scouting can be when they just want to get some lunch. So after our little detour, we ended up along the coast just south of Odiorne Point state park. 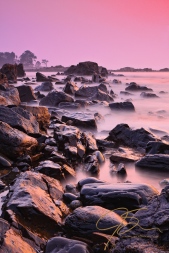 There we where we were greeted by the third guest to our little party, the fog. It was pretty obvious that we weren’t going to get the dramatic sunrise we had both dragged ourselves out of bed to capture, so it was time for some lemonade. The sun filtered through the fog combined with the smokey water created by the long exposure, made for a successful morning on the coast, and some tasty “lemonade”.

Cloud play. Little known fact, when they think no one is watching, the clouds and the sun meet in the forest to play. If you’re quiet when you visit, you may even get to see it. #mountainlight #kilkennyridgerace #wmnfhikers #fujifilmxseries
As much as I enjoy making my landscape images, I absolutely love photographing mountain runners for @rockhopperraces It takes a special breed to take on a 25 or 50 mile race through the New Hampshire mountains. This years #kilkennyridgerace has a little bit of everything when it came to weather ~ in the clouds, some sun, more clouds, hints of sun, a little rain, then a lot of rain, and mud, lots and lots of mud! But even at there worst, just about everyone was able to muster a smile when they saw me. Thanks for letting me share in your adventure. #challengeyourself #mountainrunning #whitemountainnationalforest #runforestrun
Future royalty.
Morning light and life in the garden. #nhlife #naturephotography #morningvibes
One of life’s biggest quandaries.
We had some visitors to the garden yesterday. #plantforpollinators #monarchbutterfly #natureinnh
New “pets” at the Sinon household. Brought them in before Henri made his appearance. #natureisbeautiful #monarchcaterpillar
Lunch hike. While pushing a lawnmower. #nhliving #ifitsnotonstravaitdidnthappen
I miss the mountains.