The First National Park East Of The Mississippi River.

Over the July 4th holiday my family and I finally made it to Acadia National Park. It’s a place I’ve wanted to visit for a long time. A quick drive through the park on our first day however, told me the four days we were going to be there would not be nearly enough time to uncover all Acadia has to offer.

It’s going to take many visits throughout the seasons to fully enjoy, and photograph, this wonderful National Park.

Here are a few of the scenes I was able to capture on my much too brief visit.

Seen here from just past Monument Cove on the Park Loop Road, Otter Cliffs is one of the first places in the U.S. to receive the suns rays in the morning. Often photographed, Otter Cliffs and this section of shore line, along with its amazing natural stone-work, yields composition possibilities too many to fathom. While the subject may be the same, with so many possibilities for composing an image, making this place your own should require little effort.

No trip to Acadia would be complete without a trip to the summit of the tallest peak on the eastern seaboard. For almost half the year, from early October to early March, Cadillac Mountain is the first place in the United States to see the rising sun.

Here, a family sits looking out over the Porcupine Islands in Frenchman’s Bay, patiently awaiting the rising sun.

And The Crowd Sang Out.

Membership in the Cadillac Mountain Sunrise Club has but one requirement: experience sunrise from the top of the mountain. Not too tough, as long as you’re willing to get up early enough, and in the summer that means around 3:30 a.m., and be at the summit in time to greet the sun.

As the sun crested the horizon, the members of the Cadillac Mountain Sunrise Club, their numbers many and who had sat there peacefully, surprised me with a loud cheer! Hearing it brought a smile to my face and made me want to shout out as well. An outstanding start to the new day.

The club was much less exclusive than I had thought. Normally when I’m out shooting a sunrise I have the place all to myself. Or at least the only other people there are a few other dedicated photographers willing to forego sleep in pursuit of the perfect sunrise. On Cadillac there were dozens of people, many dozens. While I was the first one there that morning, I’m sure if I had gone back to the parking lot I would have found it full to over-flowing. Only on Mount Washington in New Hampshire have I seen a larger crowd up this early eagerly awaiting the sun.

The sun just crests the horizon with Frenchman’s Bay and the Porcupine Islands in the foreground.

And Then I Was Alone.

Or so it seemed. The sun was fully above the horizon, and the light going fast, by 5:30 a.m. Too early to head back to my campsite and wake my wife and daughter, so I lay back on the pink granite slope to relax and enjoyed the morning. By 6 a.m. I had the summit of the mountain all to myself, there wasn’t another  human being around. But I soon found I was not alone. As I began my descent, this lovely whitetail doe was kind enough to pose for me.

Whitetail doe on the slopes of Cadillac Mountain.

In the park there are 45 miles of gravel carriage roads, built between 1913 and 1940, and financed by John D. Rockefeller Jr. as a gift to the park. The roads are only open to foot, bicycle, and horse traffic. These carriage roads often travel over one of the 17 stone faced bridges, 16 of which were also financed by Mr. Rockefeller, found throughout the park. This one below, on Stanley Brook Drive, with its three arches and amazing detail, is my favorite of the ones I’ve seen so far. 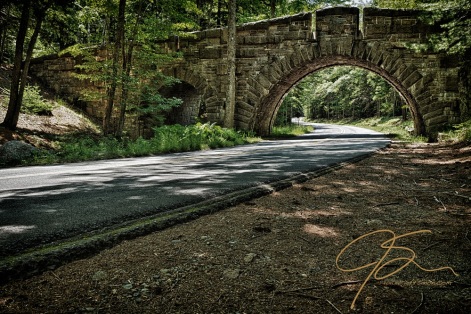 One of the 17 stone face bridges in Acadia National Park.

Not Just For Photographers.

Acadia National Park offers opportunities not just for photographers but for outdoor enthusiasts of all types, from hiking, cycling, horse-back riding, swimming (if you dare brave the frigid Atlantic), and rock climbing. Otter Cliffs is a popular destination for the latter. Myself, I’ll photograph it safely from a distance, thank you very much.

I have only had the chance to process a few of my Acadia images. As I work my way through the rest I’m sure I’ll be sharing a few more. In the mean time, if you find yourself in New England, Acadia National Park is well worth the visit.

26 thoughts on “Acadia At Last”