I’m not afraid to use whatever ISO I need in order to capture a photo, and last Sunday my Fujifilm X-T2 impressed me once again with how well it handles high ISO, in this case 12,800.

My chosen spot for the morning was at the hairpin turn near mile 6 on the Mount Washington Auto Road. I was there to photograph a group of adaptive sports athletes as they made their attempt at reaching the 6,288′ summit of Mount Washington. So, after photographing the first group of athletes as they made their 2:30 a.m. start, I drove up to my favorite vantage point on the road, the hairpin turn.

With sunrise still almost 3 hours away, and the first athletes not expected to pass my position for a couple hours after that, what I should have been doing was taking nap.

Instead I decided to get my tripod and camera set up and play around a little bit. Mind you I am NOT a night sky guy, so I was totally winging it when it came to setting my exposure. Being too lazy(too tired?) to bother calculating a proper exposure. I kind of winged it. Setting the aperture on my lens, the amazingly sharp Fujinon XF16-55mm f/2.8 LM WR,  to f/2.8, on the camera I set a shutter speed of 60 seconds, I dialed in ISO 12,800. Again, these settings, especially the ISO were totally guesswork on my part.

The first thing to surprised me about this shot was how grossly overexposed it is. I really had no idea how a 60 second exposure at ISO 12,800 was going to come out. One little quirk I’ve discovered with my X-T2 is that even with the LCD and EVF set to reflect the exposure settings, as well as my chosen film simulation, I find it extremely inaccurate under very dark conditions. So my exposure settings reflect my attempt to get the LCD, and more importantly the live histogram to show what the final exposure would look like.

Based on how the photo came out it’s pretty obvious I could have used a much, much lower ISO and/or a shorter exposure time.

The second thing that surprised me about this shot was just how little (in my opinion) noise there was when using such a high ISO for and such a relatively long exposure.

Here’s a tight crop from the left side of the image, no noise reduction has been done at this point. There’s little color and luminance noise, but that’s about it.

The third thing, and this is something that continually surprises me about the image files from my Fuji cameras, is just how well the noise cleans up in Lightroom. The color noise disappears with a setting of 5, and the luminance noise becomes a pleasing grain with a setting of 25-30.

(Ignore the fact that neither the above or below crops are sharp. With the focus set much closer to the camera, and using an aperture of f/2.8, this section of the image falls well outside the area of sharp focus. I  only chose this area of the image as it had the most visible noise). 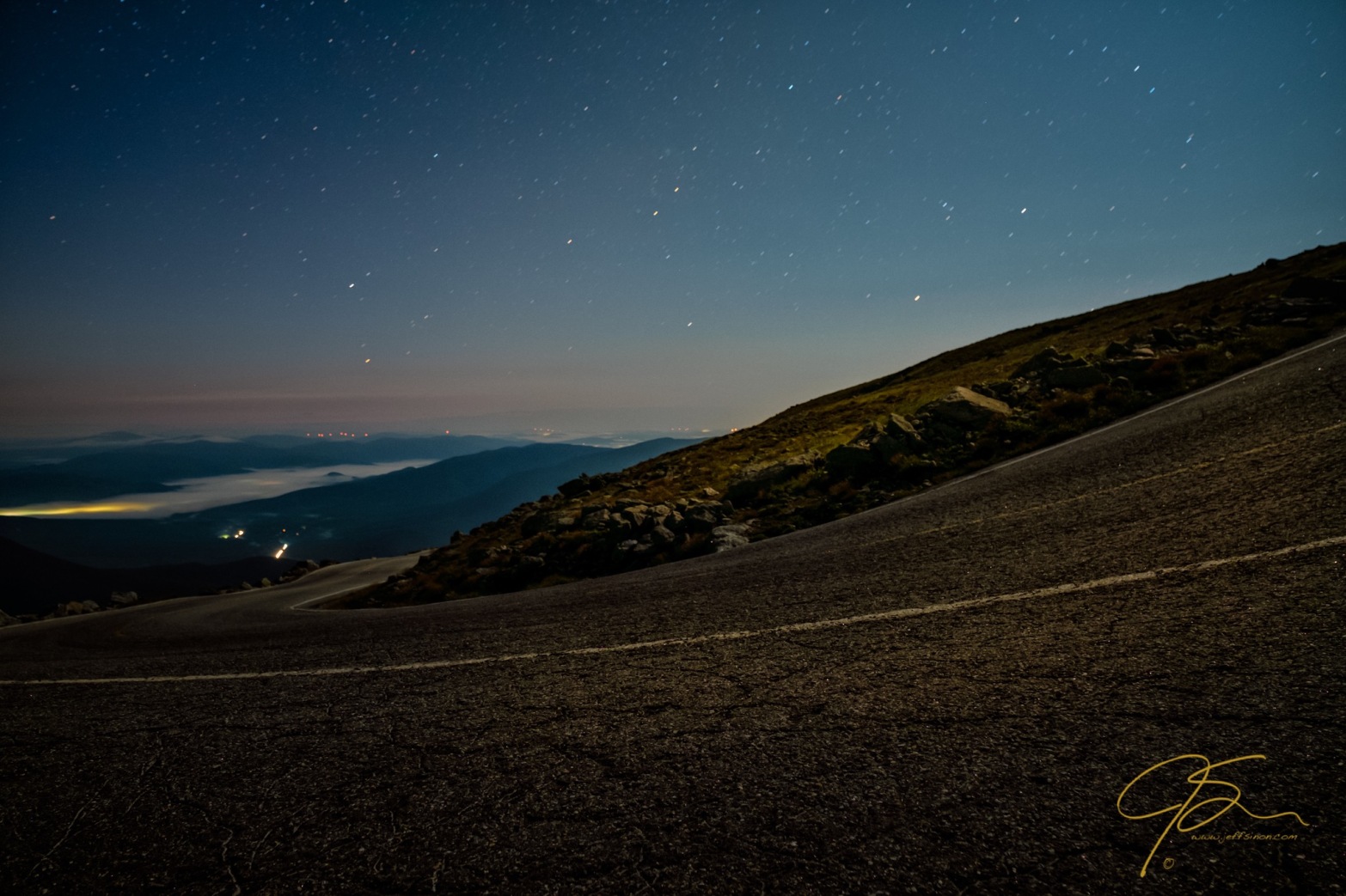 Here’s the final image, adjusted to more accurately reflect what 2:30 a.m. on a moonlit night on the Mount Washington Auto Road actually looks like. This included bringing down the exposure a whopping 5-stops!

As far as noise correction goes only needed to use a Luminance setting of 15 to reduce a little of the grain in the sky. I didn’t use any color noise reduction at all.

While I initially wrote this to share yet another reason I’m impressed with the Fujifilm X-Series, (and my decision to switch from Canon to Fuji) this post also, albeit inadvertently,  touches on good technique for avoiding noise when using high ISOs. This goes for any camera brand, not just Fuji.

First of all, shoot in RAW. Then adjust your camera settings to slightly overexpose the image. Once you’ve uploaded the photo to the image editing software of your choice, then bring the exposure back down to where it more accurately reflects the scene. This technique will reduce if not eliminate any visible noise in the final image. Whereas if you start with an underexposed image, and then try to increase the exposure after the fact you’re going to introduce all kinds of ugly noise into your photo.

9 thoughts on “Noise, What Noise?”